Well it doesn’t but  I’ve definitely had better starts to trips. The last week feels like it has been really long. Maybe the fact I have been to seven different countries in that time is the reason. Here’s a brief run down.

I have had enjoyable times.

The second cycle touring festival two weekends ago was great and a really good start to this trip. Thanks to everyone who came to the talks I gave and thanks to those who organised, attended and spoke.

It was also really good to see friends in Hamburg and Copenhagen. Copenhagen has definitely redeemed itself and it was nice to explore the city more fully. A brief stop in Göteborg on my way to Norway was also really good. Thanks to the two cyclists I got chatting to who also bought me beer.

Poor weather in the UK on my way to London meant I started this trip wet. Even with a night in the YHA opposite St Pancras station my feet were pretty much still wet when I was halfway across Germany. As a side note, if you plan to take a fully assembled bike on the Eurostar remember they ask you to remove all of your bags so you’ll need a way to carry them on to the train. A few bin bags doubled up does serve this purpose but lacks handles and aren’t easy to carry.

A rail strike in the french speaking part of Belgium meant a bit of a hiccup in my initial travel plans to Hamburg. The silver lining of that cloud was a brief stop in Amsterdam as my route went via the Netherlands instead of eastern Belgium. However the strike also meant I spent last Tuesday night traveling/sleeping on trains rather than being in Hamburg.

It seems an eon ago now but two Fridays ago Judith and I were cycling to the station to go to the second cycle touring when I hit and bump and there was a loud crack from my front wheel. Over the course of that day the hub continued to make loud cracking sounds. The noise grew steadily worse on the ride back from the festival the Monday after. It was clear that there was a problem with the hub and it has slowly become stiffer to spin over the past week. For something like this to break right at the start of the trip is really annoying.

However solutions are always there they usually just cost you money. So I bought a new dynamo hub in Hamburg and have had my front wheel rebuilt in Trondheim. This has meant an impromptu couple of nights in Trondheim which I hadn’t planned. I can think of worse places to be though and it seems a nice city to hemorrhage money in.

Tomorrow morning it should be full steam ahead, the wilderness awaits. 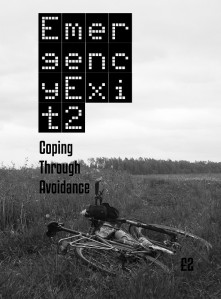 Available now from my Gumroad store